2018 was a crazy year. Some real highs and some devastating lows. The breaking point came in September when my activities were brought to a screeching halt due to a heart attack, a Takotsubo cardiomyopathy, also known as stress cardiomyopathy. Though my activities now center around rehab, exercise and doctors appointments and I have very little me time, I am enjoying the relative calm. So I have returned to some unfinished projects and some that I had on my sewing bucket list.

On my sewing bucket list was making a waxed bag. I purchased this bag pattern from Colette about 4 years ago. It is the Cooper. It can be made up as a bike pannier, a backpack or messenger bag. I chose to make the backpack but my next one will be the messenger bag.

The bag was not difficult to make. I chose linen and denim mainly to see how the tones would change when I applied wax to the surface. The pattern itself is well thought out. The packaging is elegant and the description/instructions are clear. I traced the pattern pieces onto lightweight cardboard to preserve the pattern in it's original form. I talk about Colette patterns and sustainability in an earlier blog post.  (*note: this pattern is only available in digital format) 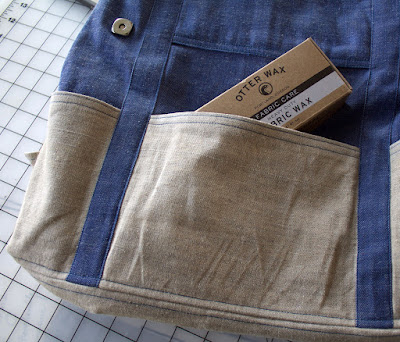 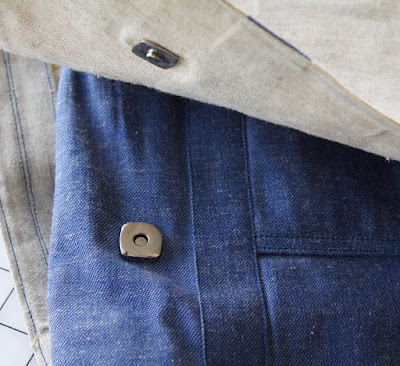 This was my first time using magnetic snaps. I was surprised at how easy they were to set. I don't know how well they will hold if the bag is packed. Something I may consider for my next stab at this is to use old fashioned leather straps and buckles to keep the bag closed and secure. It won't be as easy to open but then the chances of it popping open on it's own would be lessened. 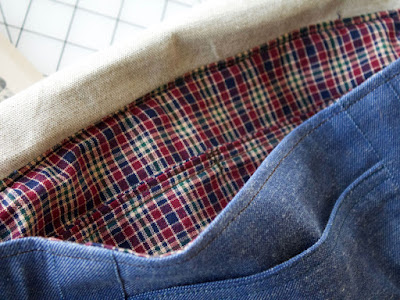 The interior lining has even more pockets! When lining the bag was complete I began the waxing process. I used half a bar of Otter Wax on this bag. The bar is rubbed directly onto the fabric and then I used a heat gun on a low setting to melt the wax into the fabric. I don't know if it is waxed enough to be waterproof but it is definitely stiffer and the colors darkened, though not as much as I had expected or wished. All in all it was a great project and a pattern that I would return to again and again.
Posted by Mary Behrens at 7:14 AM 3 comments:

Costuming for Alice in Wonderland

For the past year I have been the costume designer for Wolf Creek Players, a small community theatre in Dysart Iowa. This past February we staged a performance of Alice in Wonderland based on the 1915 Alice Gerstenberg adaptation of the story by Lewis Carroll. It was the first time Alice in Wonderland was performed on Broadway. 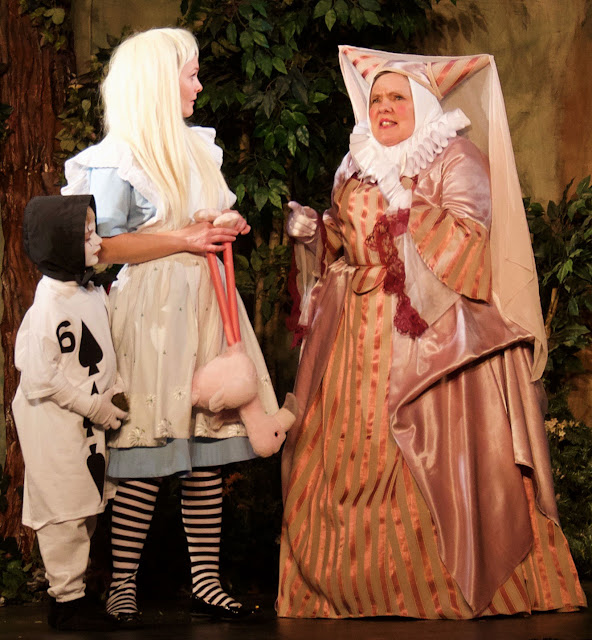 Garrett Ryan, Jana Ryan and Sandi Hulst as the 6 of Spaces, Alice and the Duchess


This was my last contribution to this theatre. The costuming was a great challenge given a limited budget and, as can be expected, time constraints. But the task was an enjoyable one and the finished garments were quite stunning, if I may say so. The role of the costume in a theatrical production is to help transform the actor into their character. I think I did my job.

The Embellished 1920's One Hour Dress

The 1920's silhouette is cut rather straight and plain. The dresses distinguished themselves through the embellishments that were added. Often a simple slip dress was worn under an overdress of English netting which had been beaded, appliqued and embroidered. There is no limit to the extravagances that could be sewn to such a simple base. 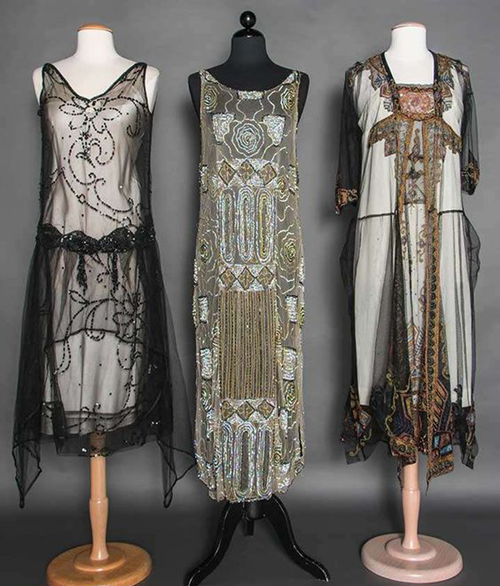 These three embellished net overdresses are a few exquisite examples of the endless variety that this fabric allows.

In April, the Wolf Creek Players will stage three one-act plays by Alice Gerstenberg that take place in the 1920's. For these plays I have purchased netting and will enjoy embellishing the overdresses to match the personality of each character. The basic overdress may be taken from this 1920's booklet, The One Hour Dress. Since the handwork will be significant, it would be a relief to work with a simple form that takes so little time to construct. 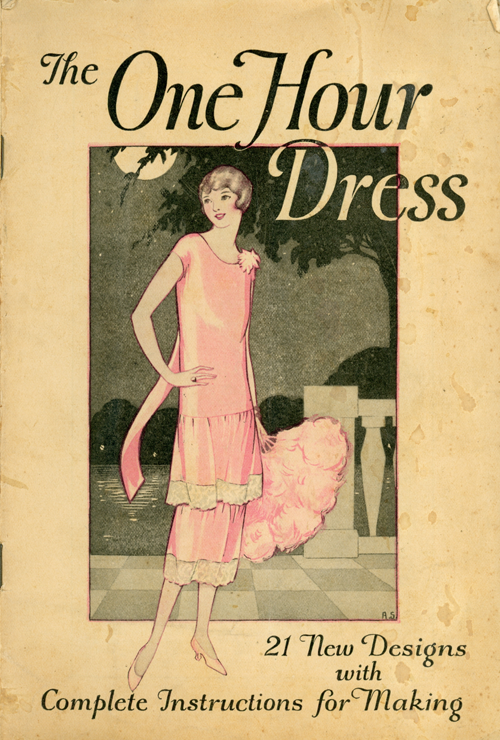 We adopted a tiny Chihuahua this week. Her name is Lola.

She was orphaned after her owner of 10 years passed away. I saw this photo on the Poweshiek Animal League's Facebook page and, without hesitation, messaged for an appointment to meet little Lola. That was last Saturday. Tuesday, nervous and shaking, she rode home with us.

After a couple of days of hissy fits from Saskia, our grey tiger, the two girls have arrived at a mutual but cautious curiosity about each other, though both are quick to retreat to their own safe zones when tensions heighten.

We were told that Lola was not housebroken and wouldn't walk on a leash. To our surprise and delight we have found that she loves to take walks on the leash and even does her business while out and has not once used the potty pads or done any "odd jobs" around the house.

I found McCall's M6455. This patterns includes instructions and tissues to make several necessities for dogs (or perhaps cats too). 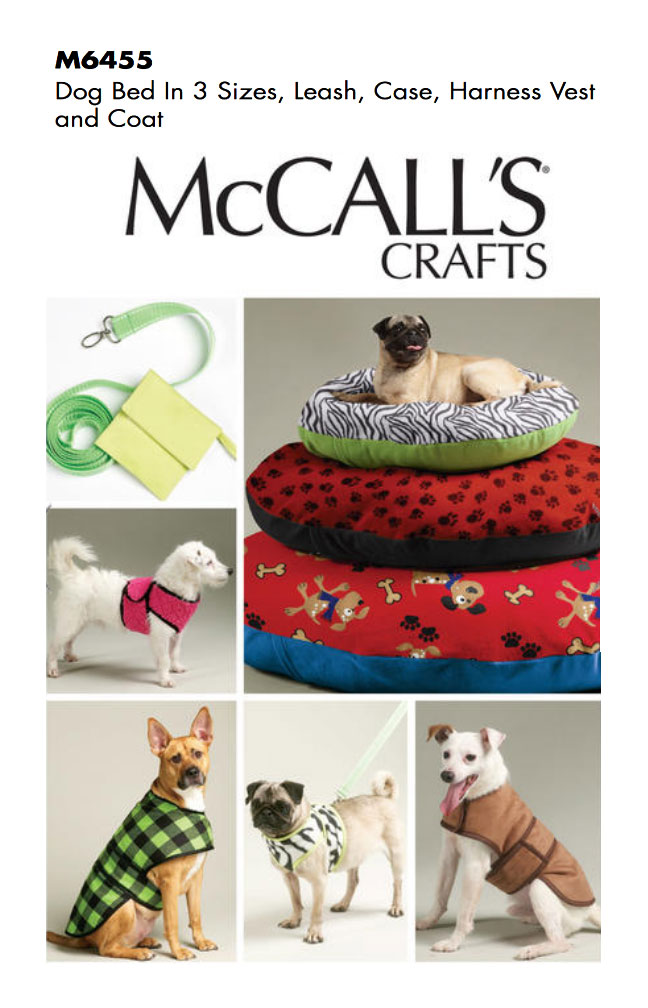 I made the harness in the smallest size like this one. 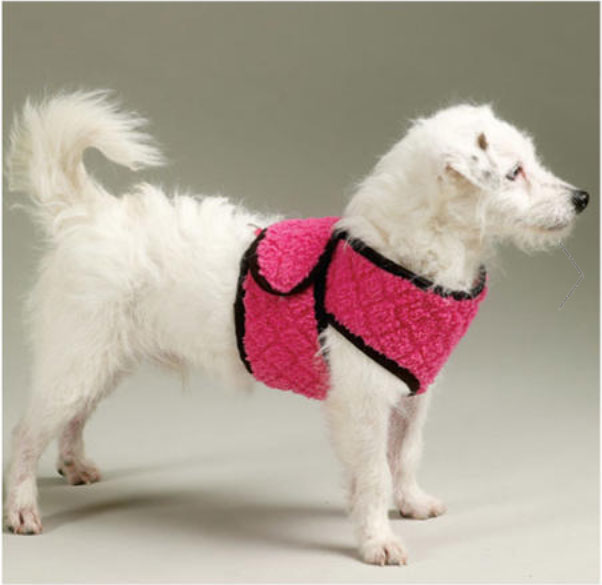 But even the smallest size is way too large for little Lola. 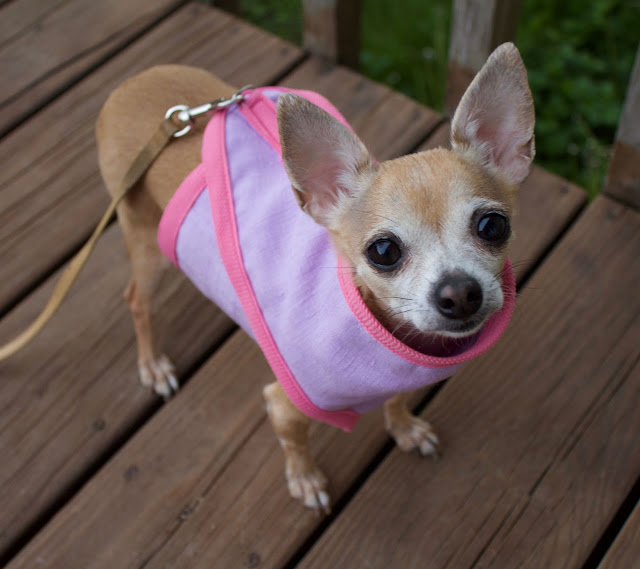 Though it doesn't scratch at her neck and the leash is no longer problematic, the looseness allows her front legs to get lost in the harness and she stops walking. 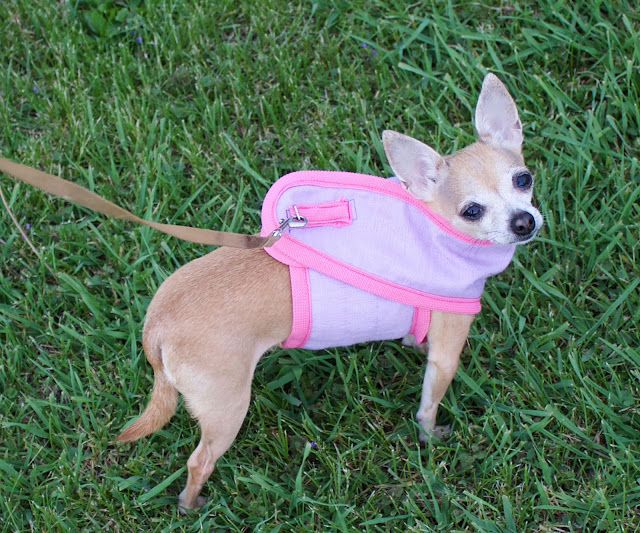 I redesigned it a bit to accommodate her small size but I think it is back to the drawing board for a simpler type of walking harness that is Velcro free but still keeps the neck free and the leash at the back. Stay tuned. I think I have an idea that just might work.
Posted by Mary Behrens at 6:41 PM 2 comments:

I am having a great time paging through about 20 School Arts Books from the early part of the 1900's. This article by Mrs. Percy L. Wright from Clinton, New York details how to use Crayola crayons to decorate fabrics. This technique is still very much used if you judge but the numbers of You Tube videos, books and specialty crayons available. But to think this dates back to the early 1900's is rather astounding. I have reproduced the article below. 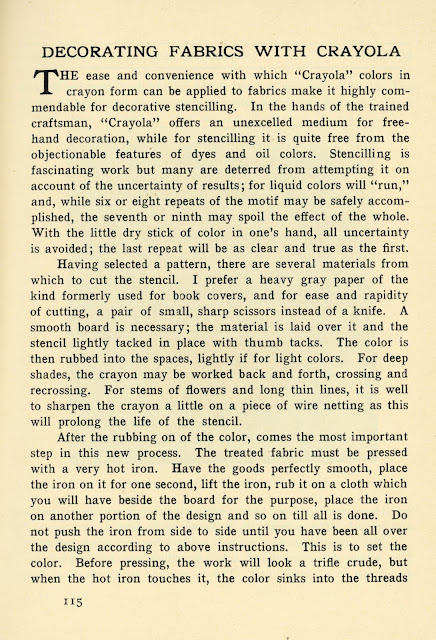 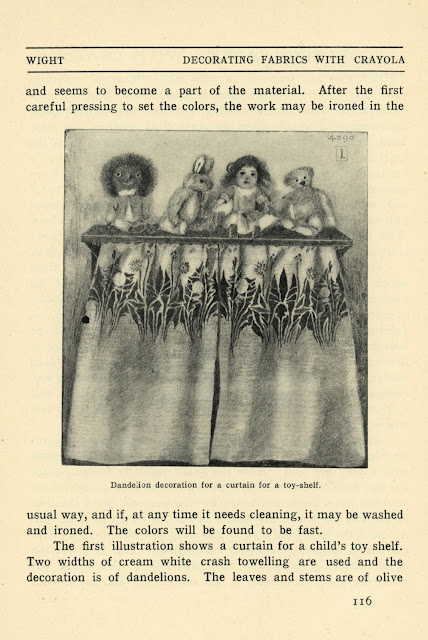 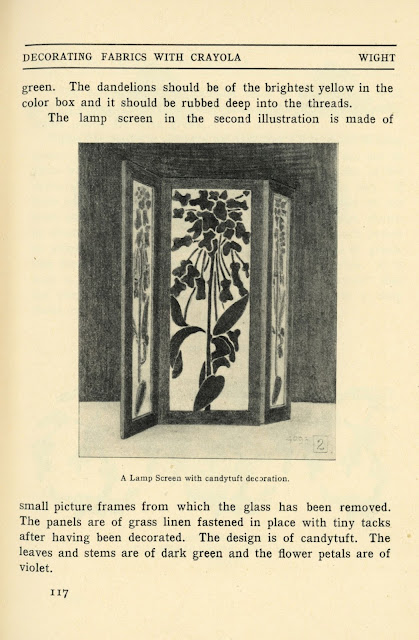 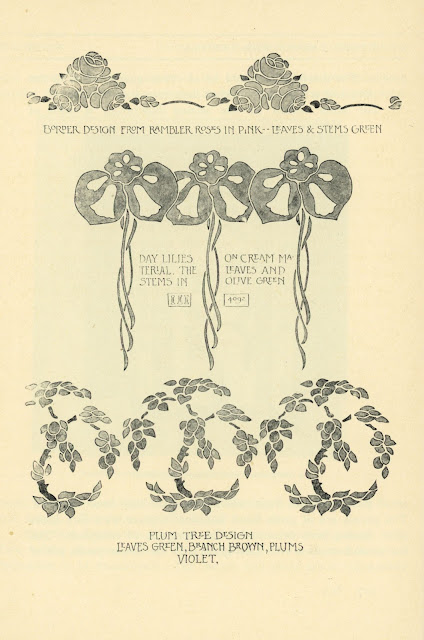 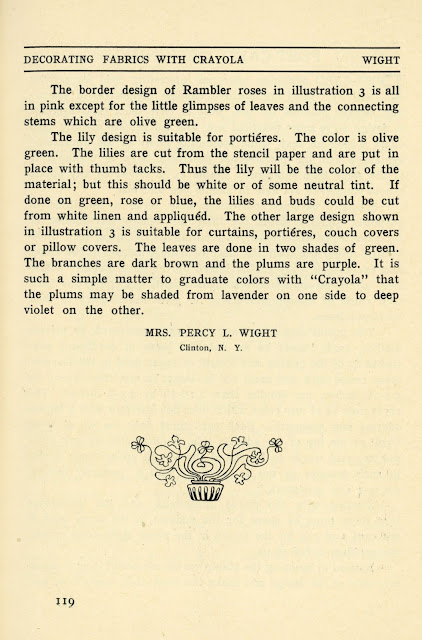 The School Arts Book, first issued by The Davis Press in 1903 is still being published. The yearly subscription (10 issues) continues to be a resource for Primary and Secondary arts education. Back in the 1900's, the arts curriculum was much broader and included applied (home arts and industrial arts) as well as fine arts (drawing and painting).

The September 1908 issue included a pattern and instructions for a hanging match box holder as well as a ladies travel wash cloth bag. Unless one is camping, a washcloth is not something one thinks of packing when traveling. However, a simple drawstring bag, such as this pattern provides, surely has many uses. 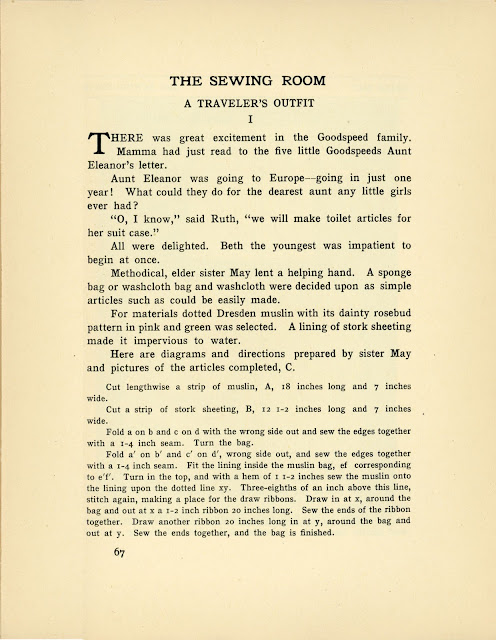 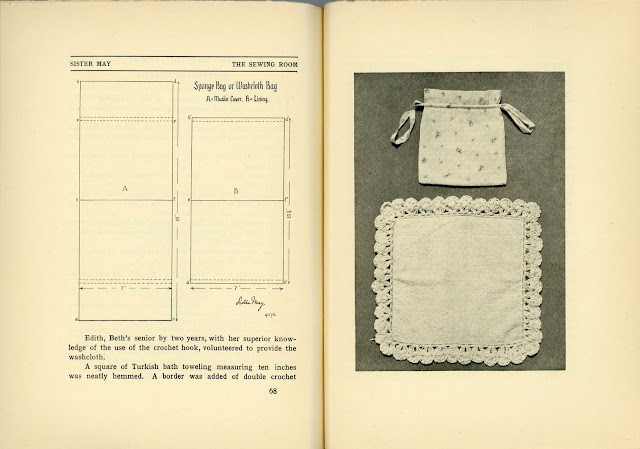 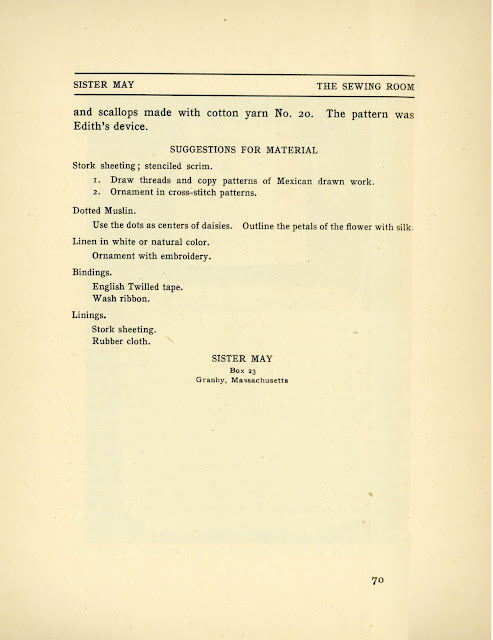 I grew up in a fanatically Catholic household. Rosaries and chapel veils were an important part of my childhood. Though I have since rejected much of those practices, my memory of the rituals are vivid.

The Wolf Creek Players latest production, Drinking Habits 2, is my first production with 100% of the costumes of my creation. Many are from my own drafted patterns. Priest's cassocks, monk's robes and nun's habits (among others) were my challenge for this production, a romantic farcical comedy by Tom Smith. Needless to say, this production evoked memories of confessionals and genuflection. Stay tuned for a tutorial on drafting a wimple and gimp.

If you are in Iowa, or plan to be at the end of March or the beginning of April, please consider purchasing a ticket for a bit of levity and sacrilege (all in good humor).
Posted by Mary Behrens at 8:01 PM 2 comments: 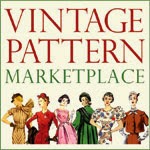 Find Me on the Wikia